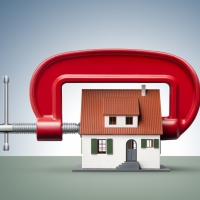 Some Canadian homebuyers are taking a hit to their purchasing power as the government’s updated mortgage stress test comes into effect in an attempt to cool the country’s scorching housing market.

That purchasing power reduction is not for all buyers, only for those who are at the max, at the margins, for the qualifying process. So the market could have a bit of a cooling effect, but in and of itself we wouldn’t expect this change to engineer a significant cooling of the market the way we saw, for example, in Ontario in 2017.”

Buyers applying for or renewing a mortgage will now be required to prove they can handle a qualifying interest rate of 5.25 per cent — up from 4.79 per cent previously — or two per cent above their mortgage rate, whichever is higher. Fixed mortgage rates are currently sitting around two per cent, and variable rates even lower.

The change, announced by the Office of the Superintendent of Financial Institutions in April, in effect as of June 1, will impact homebuyers with uninsured mortgages and a down payment of 20 per cent or more.